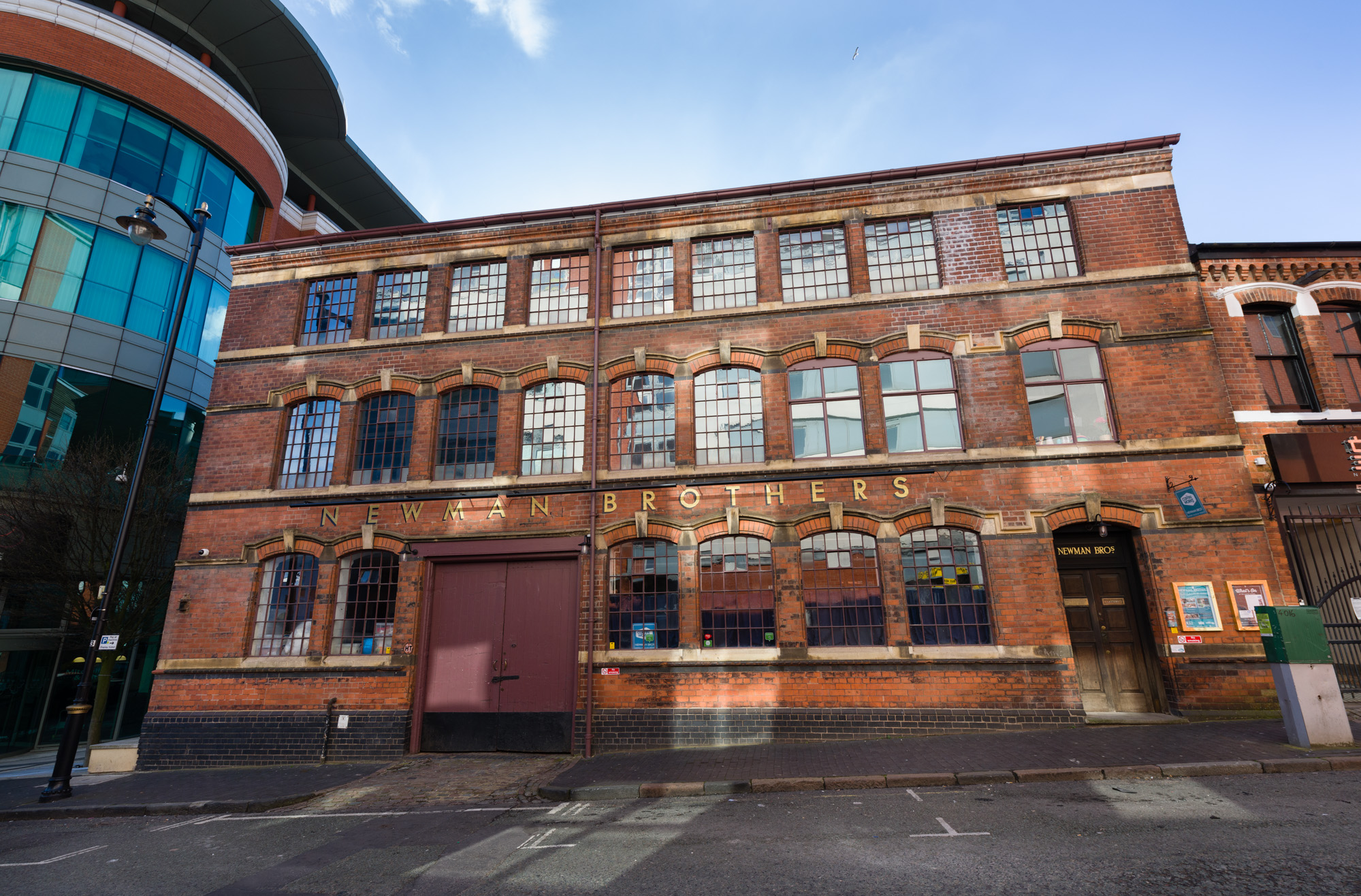 Origins of the Business

Newman Brothers was established in 1882 by Alfred and Edwin Newman. They were brass founders who originally specialised in cabinet fittings and worked from rented factories in other parts of Birmingham. In 1892 they commissioned architect Roger Harley to design them a manufactory in the Jewellery Quarter, dedicated solely to the production of coffin furniture – the handles, crucifixes and ornaments that adorned the outside of coffins. Two years later they moved into these new premises on Fleet Street, which they called the Fleet Works, but is today known as the Coffin Works.

In 1895, just one year after the factory had opened, the partnership between Alfred and Edwin Newman was dissolved and from then on Alfred ran the business as a sole trader. 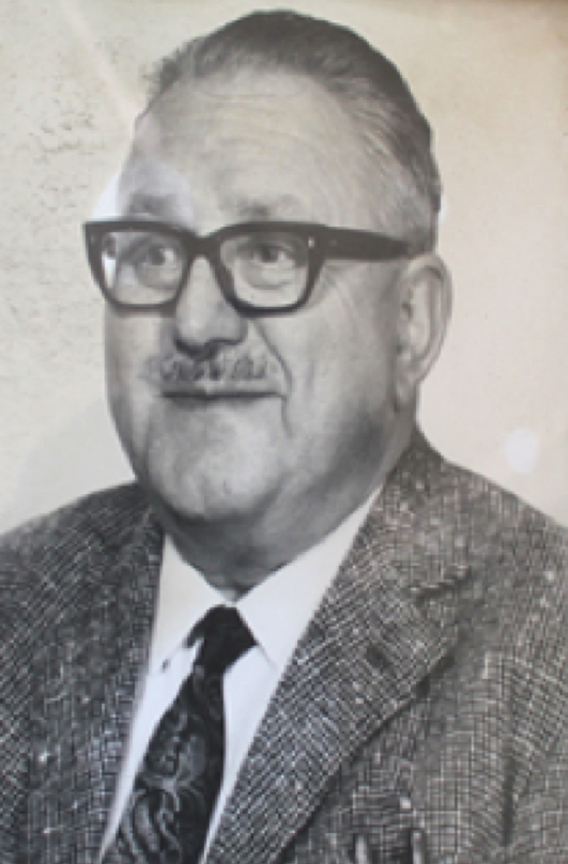 Newman Brothers Coffin Works is a factory in Birmingham’s Jewellery Quarter, which was built in 1894, when Queen Victoria was still on the throne, and finally closed in 1998. It is special for three reasons. First, when the factory closed, almost everything in it was left as if at the end of an ordinary working day – the machinery, the stock, even a pot of tea on the stove. It has been described as a sort of mercantile Marie Celeste. Second, it made a rather unusual product: coffin fittings. These are the handles, breastplates, screws and ornaments for a coffin. They also made the ‘soft goods’ for a coffin: the linings, frills and cushions, as well as the funerary gowns for the deceased. In fact, they made everything for the coffin except the coffin itself. They sold directly to undertakers, not the general public. 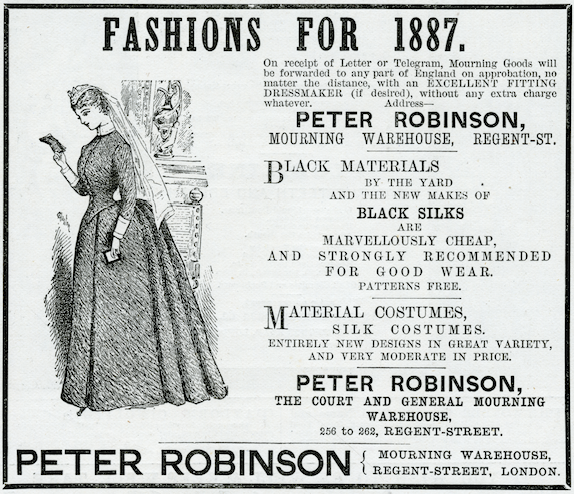 When Newman Brothers made the transition from manufacturing cabinet furniture to coffin furniture, it was at the height of the the Victorian’s preoccupation with death.

The third reason that the factory is special is that Newman Brothers didn’t just make coffin fittings, they made the very best. Amongst their customers were the royal undertakers, and Newman Brothers’ coffin fittings have adorned the coffins of George V and VI, Queen Mary, Princess Diana and the Queen Mother, as well as great statesmen such as Winston Churchill. Learn more about the royal connection by clicking here.

Over the hundred years that factory was in business, society changed greatly, and with it attitudes to death and funerals. Newman Brothers represents a period when the fashion for lavish funerals was at its peak, and it declined as attitudes changed, especially after the Second World War. Indeed, so old fashioned was the factory that some of the machinery is original, and nearly everything else was very out of date by the time the factory closed.

The last proprietor, Joyce Green, who had worked at the factory for 50 years, realised what a special place it was, and was determined to preserve it as a museum. Heritage organisations agreed, and although it took 15 years, in 2014 Birmingham Conservation Trust was proud to re-open the factory as a heritage attraction. Unfortunately, Joyce did not live to see this day.

In 1933, Alfred Newman died. He may have known that he was terminally ill because in that year he incorporated the company, which became Newman Brothers (B’ham) Limited. The company was valued at £12,500 (about £786,000 in today’s terms), and on Alfred’s death, the shares were divided equally between his two sons, Horace (on the left) and George (on the right), his daughter, Nina and his grandchildren. Together, Horace and George took over running the business. George died in 1944 and Horace in 1951. After that point, the business ceased being run by any Newmans, and was instead managed by a number of shareholder directors.

RESCUE AND RESTORATION: The Rescue Mission

In 1999 the firm of Newman Brothers (B’ham) Limited was finally wound up, and more than a hundred years of history seemed to be over.  The likely fate for the dilapidated old factory was demolition. That the Newman Brothers’ factory has survived is due to the combined efforts of the factory’s last proprietor, Joyce Green, and of many organisations and individuals who recognised its importance for the history and heritage of Birmingham and the nation.

It was fortunate that in 1998-99 English Heritage was engaged in a major survey of the manufactories of Birmingham’s Jewellery Quarter and ‘discovered’ the Newman Brothers’ factory as part of this work, just as it was in the process of winding down.  English Heritage recognised its importance immediately, and had it listed at Grade II* in 2000, protecting it from demolition.

Birmingham Conservation Trust (BCT) first became involved in the Coffin Works in 2001, when a report was commissioned to look at the options for the future of the building.  The report concluded that turning the whole factory into a museum would probably not be financially viable (it would not generate sufficient income to maintain the building) and recommended mixed use – about half of the factory would become a museum, with the rooms preserved as near as possible to how they looked when the business closed, while the other half of the building would be converted into units for let.  This would generate two distinct income streams to ensure a sustainable future.

In 2002 BCT submitted a bid to Advantage West Midlands (AWM), the regional development agency, for AWM to purchase the building and its contents, on the understanding that the Trust would undertake the work.  This turned into a nail-biting experience for the Trust, as AWM did not complete the purchase, for £400,000, until the 31st March 2003, in the final hours of the financial year. 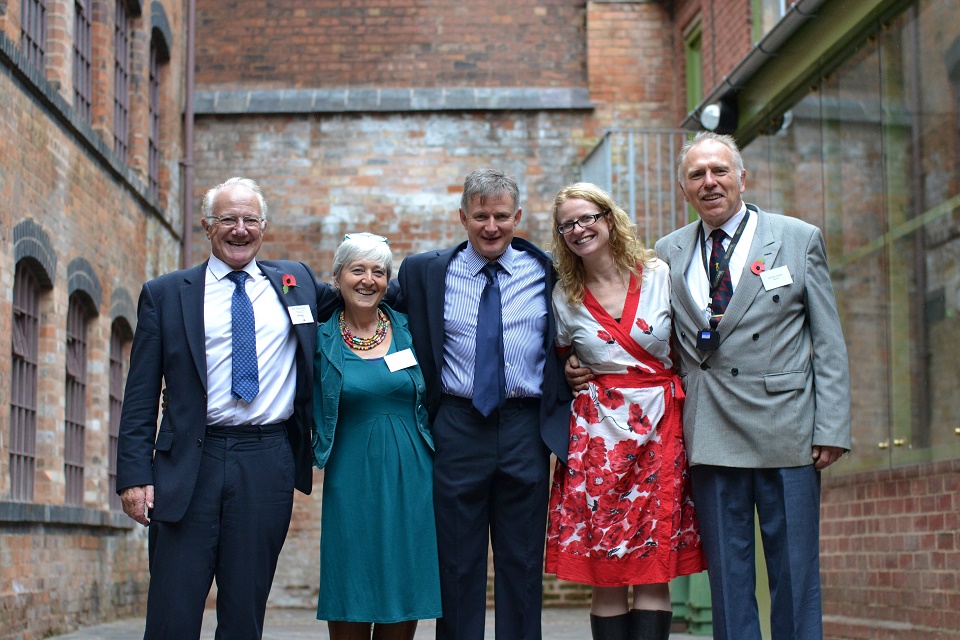 Now there ‘just’ remained the task of raising the funds for the repair and conservation of the Coffin Works.  In the vanguard was BCT’s dynamic Director, Elizabeth Perkins, who was at the time heavily engaged in the restoration of the Birmingham Back-to-Backs and negotiating their transfer to the National Trust on completion.  The first series of the BBC’s Restoration programme, hosted by Griff Rhys Jones, offered an early opportunity. The excitement mounted in August 2003, when the Coffin Works was one of three nominations in the English Midlands, but didn’t make it to the finals; that year Victoria Baths in Manchester took away the £3.4 million prize money.  Nevertheless, the programme had raised the profile of the Coffin Works, and it featured again in Radio 4’s Hidden Treasures, presented by Lucinda Lampton, in July 2004.

However, problems were emerging.  Surveys had established that the Coffin Works was badly contaminated; it was also riddled with asbestos.  Advantage West Midlands put the project on hold while the problems were dealt with.  As months turned into years, the overall condition of the building was deteriorating also.  Despite emergency repairs, the state of the roof was getting worse, and water was pouring in, collecting in buckets which BCT staff and volunteers had to empty every time it rained.  This put at risk the building’s contents, and especially the more fragile items such as paperwork in the Office and fabrics in the Shroud Room.  The decision was made in 2007 that the contents – everything except the heaviest machinery – would have to be moved to safe storage off site, but not before it was all carefully photographed in situ and catalogued, so that one day things could be returned to their former places.  All this involved more trouble and expense. 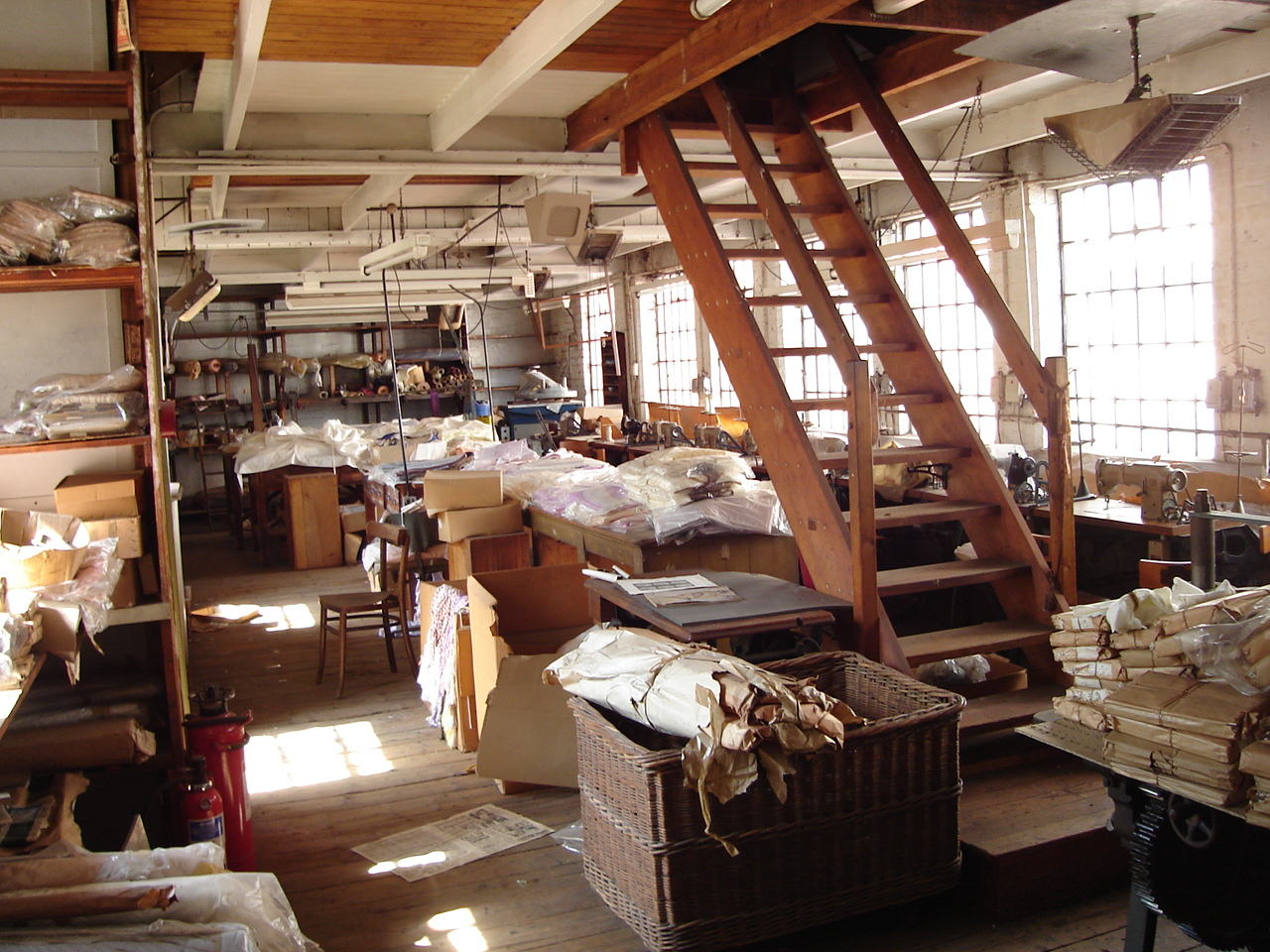 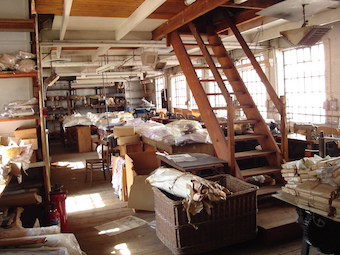 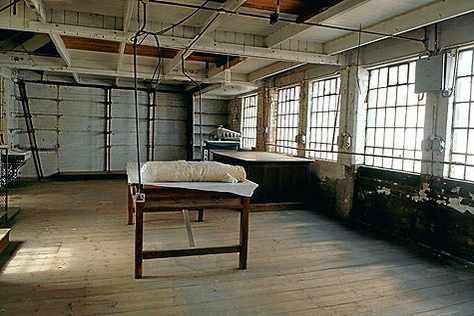 Before the contents were removed, one other very important piece of recording needed to be done – getting on record for posterity the stories of former workers at the factory, while they were still alive and their memories fresh.  In 2006, the last proprietor, Joyce Green, and as many of the employees as possible were interviewed on camera, in their old workplace, bringing the memories flooding back.

Meanwhile, Elizabeth Perkins and her colleagues at Birmingham Conservation Trust were also working on all the research and paperwork needed for major grant applications. Initial applications to Advantage West Midlands and the Heritage Lottery Fund were turned down, plans were altered, and hopes were dashed again.

But by March 2009, everything looked set fair for the project to get the funding it so desperately needed, with revised applications submitted to both Advantage West Midlands and the Heritage Lottery Fund.  Then disaster struck.  In the wake of the 2008 recession, the government cut almost all funding to the regional development agencies, and AWM had to withdraw its funding offer to the Coffin Works.  It was back to the drawing board; historic building conservation is not for the faint hearted. 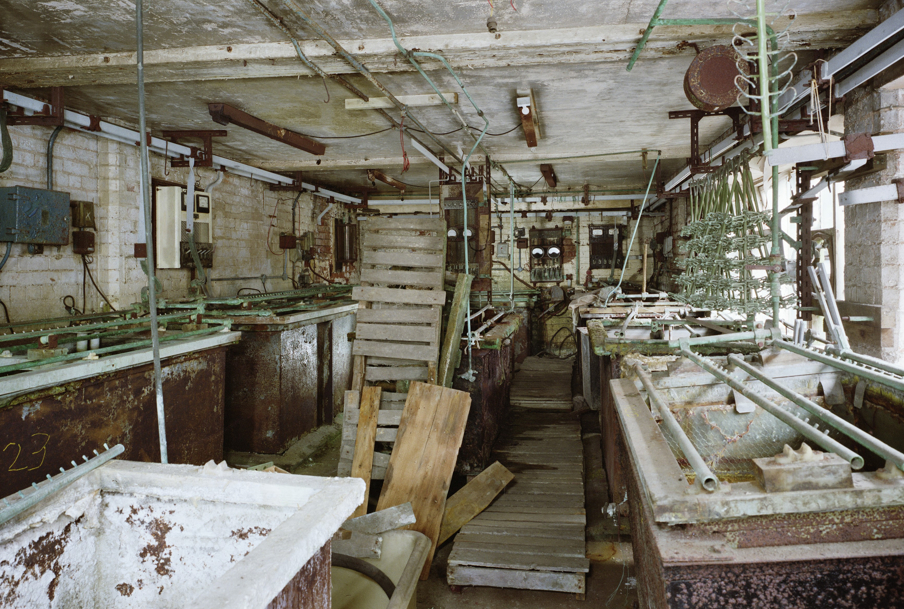 The whole building was in need of desperate attention. The Plating Shop, shown here, had to be decontaminated due to the dangerous chemicals used in there over many years. In the end, everything had to be removed from the Plating Shop because of contamination. Today it forms part of our let office space.

Without funding from Advantage West Midlands and in the climate of post-recession austerity, plans for the Coffin Works had to be scaled down.   Fortunately, in the process of winding down, AWM agreed to sell the Coffin Works and its contents to Birmingham Conservation Trust for a ‘knock-down’ price.  Birmingham City Council provided a grant of £150,000, which made the purchase possible, and by August 2010 the Trust was proud owner of the Coffin Works, albeit in a derelict state.  English Heritage put their money where their mouth is, eventually contributing £450,000 for repairs, which would help to take the Coffin Works off the Buildings at Risk register.  And by June 2011 the Heritage Lottery Fund had approved a grant of £999,400.  Things were going in the right direction at last, although it wouldn’t be until 2013 that all the funding needed for the almost £2 million project had been put in place, and work could start on the restoration.  It had taken 14 years.

Sadly, Joyce Green, Newman Brothers’ last managing director, without whom the rescue would probably never have happened, did not live to see the happy day; Joyce had died in 2009.  Elizabeth Perkins, who as Director of Birmingham Conservation Trust had never given up on the project through the highs and lows of the struggle to raise the funds, had eventually moved on to a new job in 2012, leaving it to a new Director, Simon Buteux, to oversee the ‘easy bit’, the restoration work itself.