By Sarah Hayes6th April 2022At The Coffin Works, Awards, Blogs 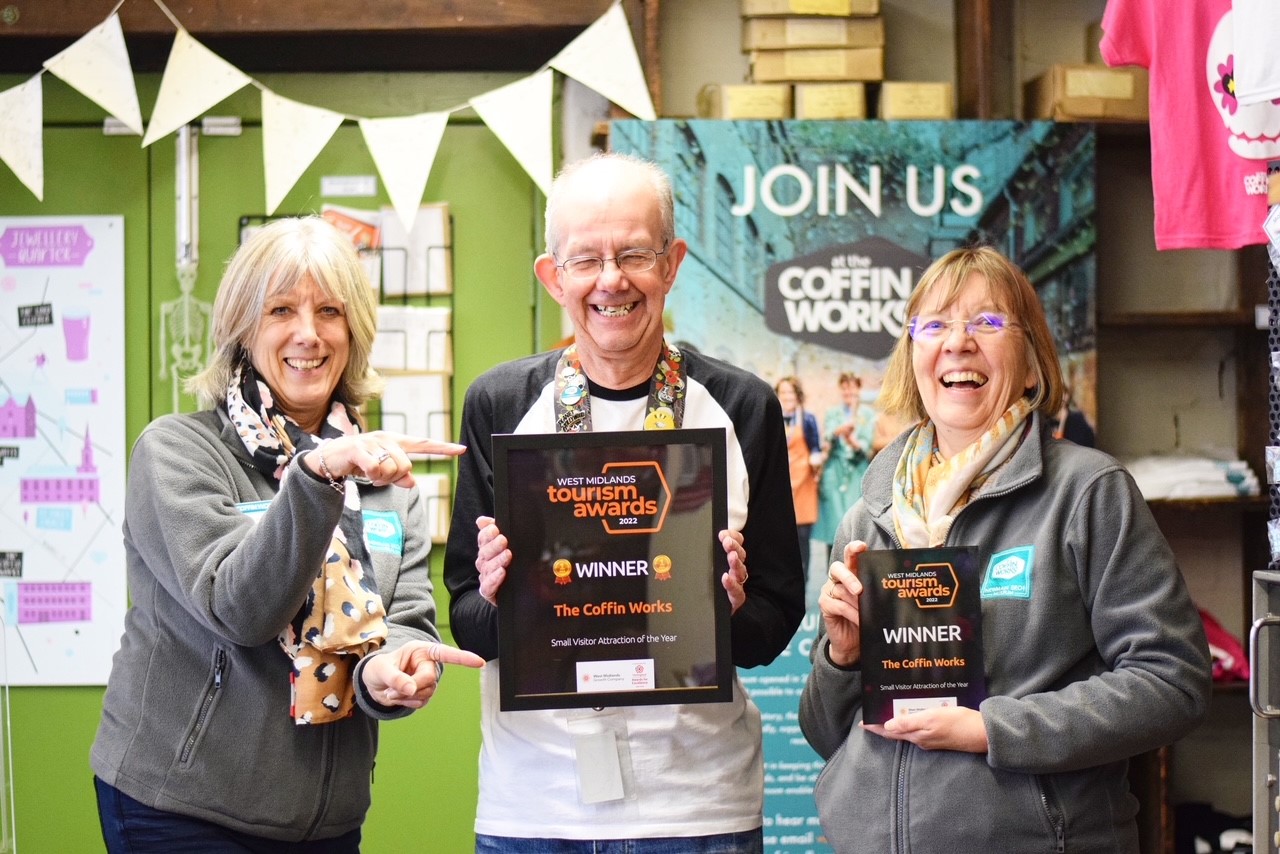 The Coffin Works Museum secured the prestigious award for ‘Small Visitor Attraction of the Year’ in the West Midlands Tourism Awards, in partnership with Visit England.

The category commends small visitor attraction businesses providing truly memorable visitor experiences and demonstrating excellence across every aspect of the business. In order to be eligible to apply, the attraction had to receive 75,000 visitors or fewer per year or employ 10 or fewer full-time equivalent members of staff. Special thanks to the Jewellery Quarter Business Improvement District (JQBID), who sponsored the table at the awards ceremony held at Coombe Abbey in Coventry.

Judges also selected winners based on online presence, including how well this encourages visitors to come to the area in the first place, how they are inspired to choose businesses to visit, the information provided, viewing on different media (tablets, smart phones etc), accessibility, social media, online reputation and reviews. In addition, for the 2021/22 awards, judges were also looking for evidence of recent customer reassurance within their online presence as a result of the COVID-19 pandemic.

The Coffin Works was forced to close for over a year during the height of the Covid-19 pandemic and in order to re-open in line with government guidance, the team decided to make some radical changes. In addition to their award-winning guided tours, they developed a hybrid model, which also offered self-guided visits. This was a necessary move in order to reopen to the public in line with restrictions. This allowed the Coffin Works to welcome more visitors and remain profitable, while instantly becoming more accessible and family friendly. This was aided by the addition of a new interactive area, a Digital Guide and QR codes to facilitate visits. 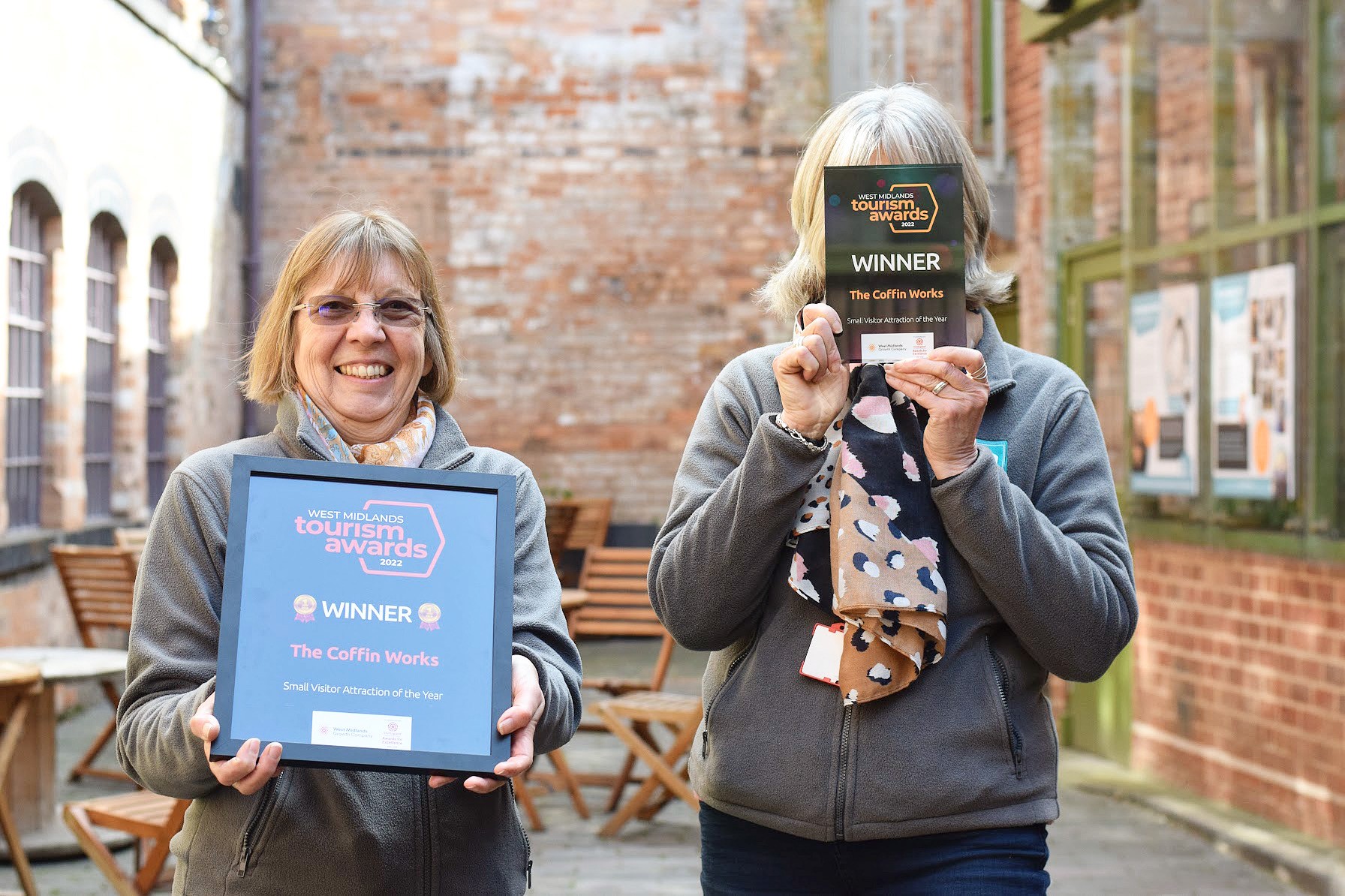 Perhaps the most ambitious addition was managing to motorise original machinery in their historic Barrelling Shop. This was achieved by raising £5,500 via a Crowdfunding campaign during the height of the pandemic and meant that a previously hidden space had now become accessible to the public.

The Coffin Works was also shortlisted in the ‘Resilience and Innovation’ award category, for which it received a ‘Highly Commended’ accolade. This category recognised businesses within the tourism industry who have demonstrated innovation, resilience and adaptation during the Covid-19 pandemic. 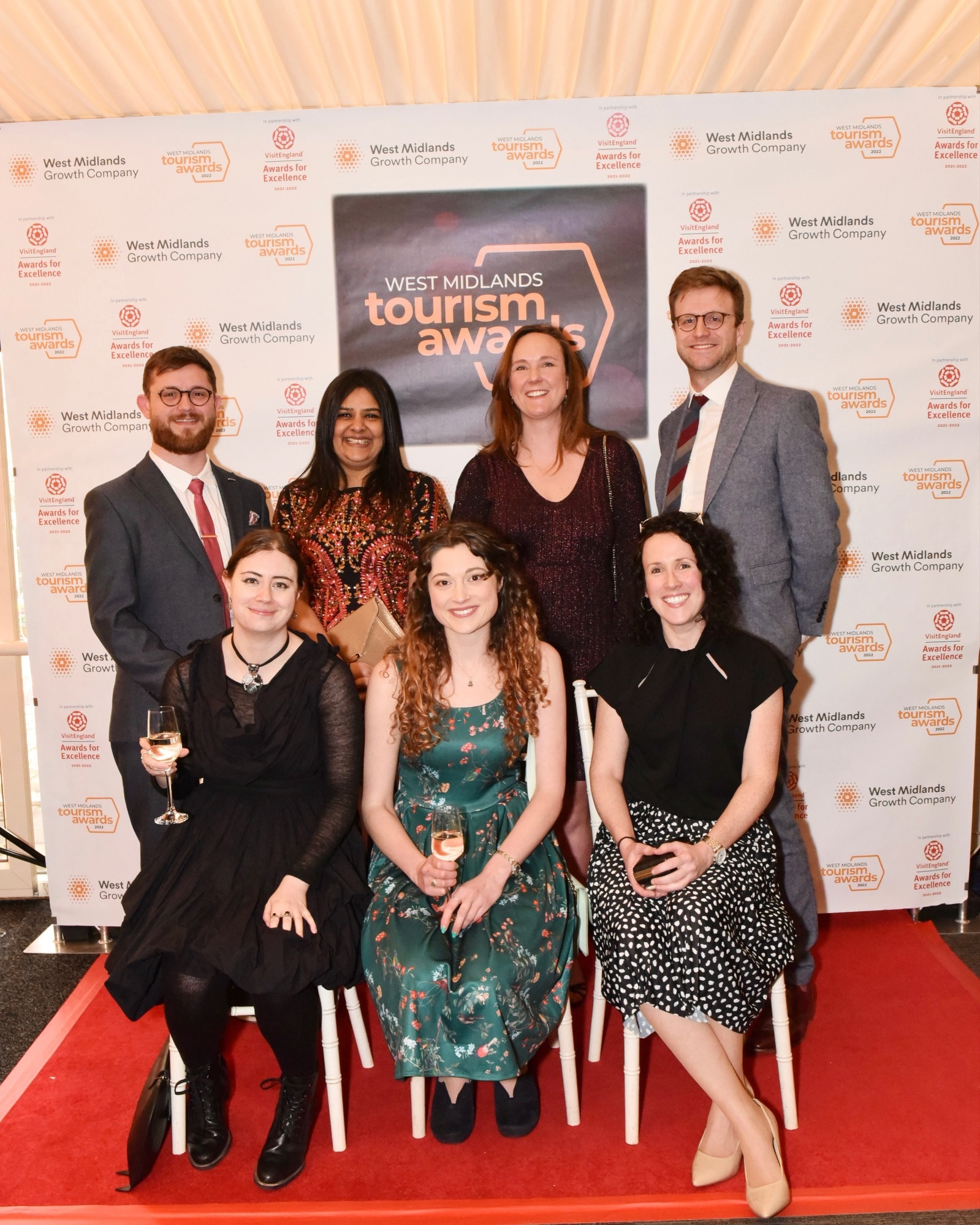 “This award feels extra special because of how challenging the last two years have been. At one point, it felt as though we may never open again, and here we are two years later being recognised for how we’ve not only survived the pandemic, but come out even stronger because of the innovative changes we embraced. That is down to the gritty willingness of the Coffin Works’ team to take risks and push for excellence. Hands down, our survival instincts kicked in and we’re stronger for it.” 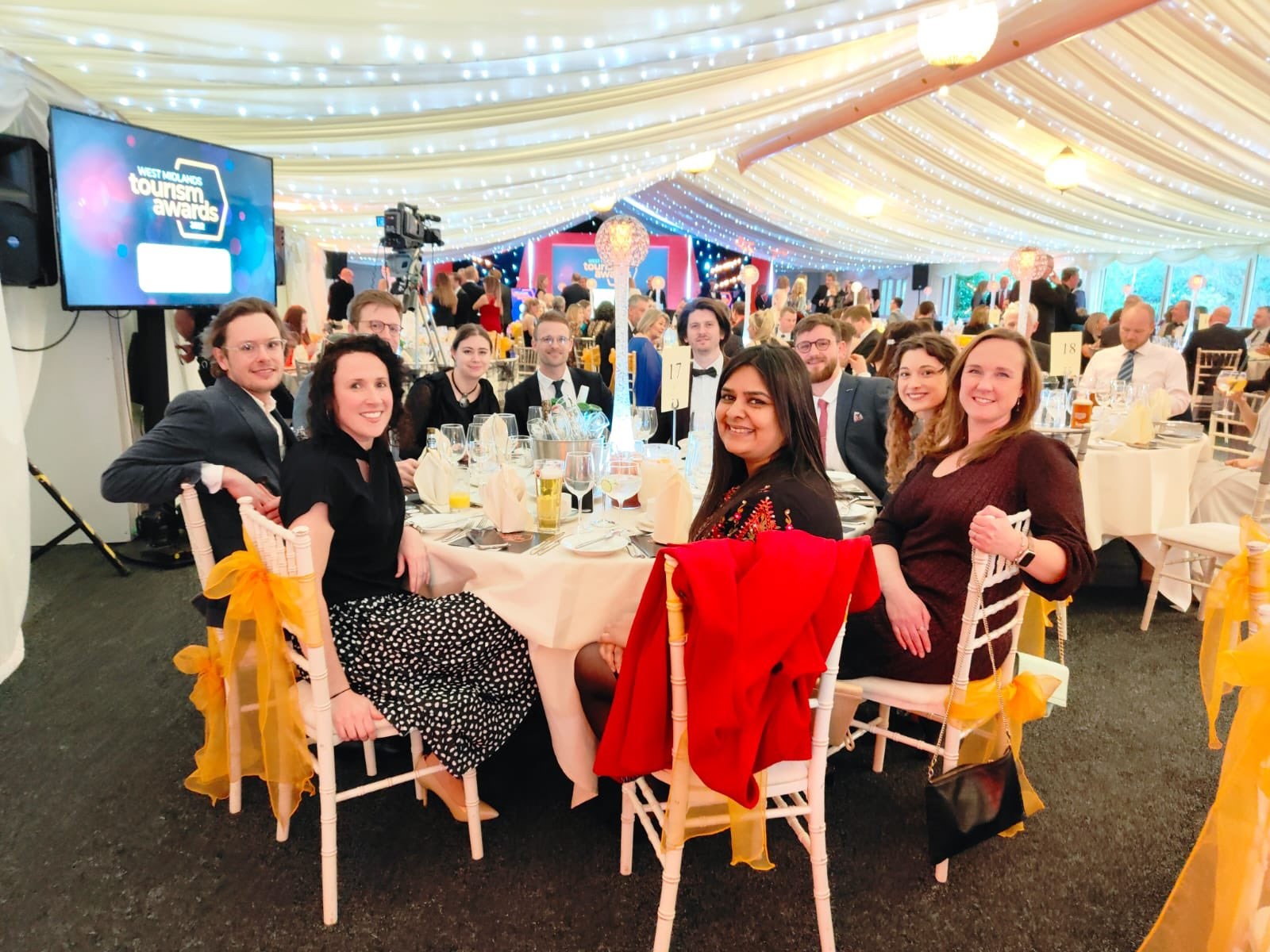 The Coffin Works will now represent the West Midlands in the national Visit England Awards for Excellence later in the year. 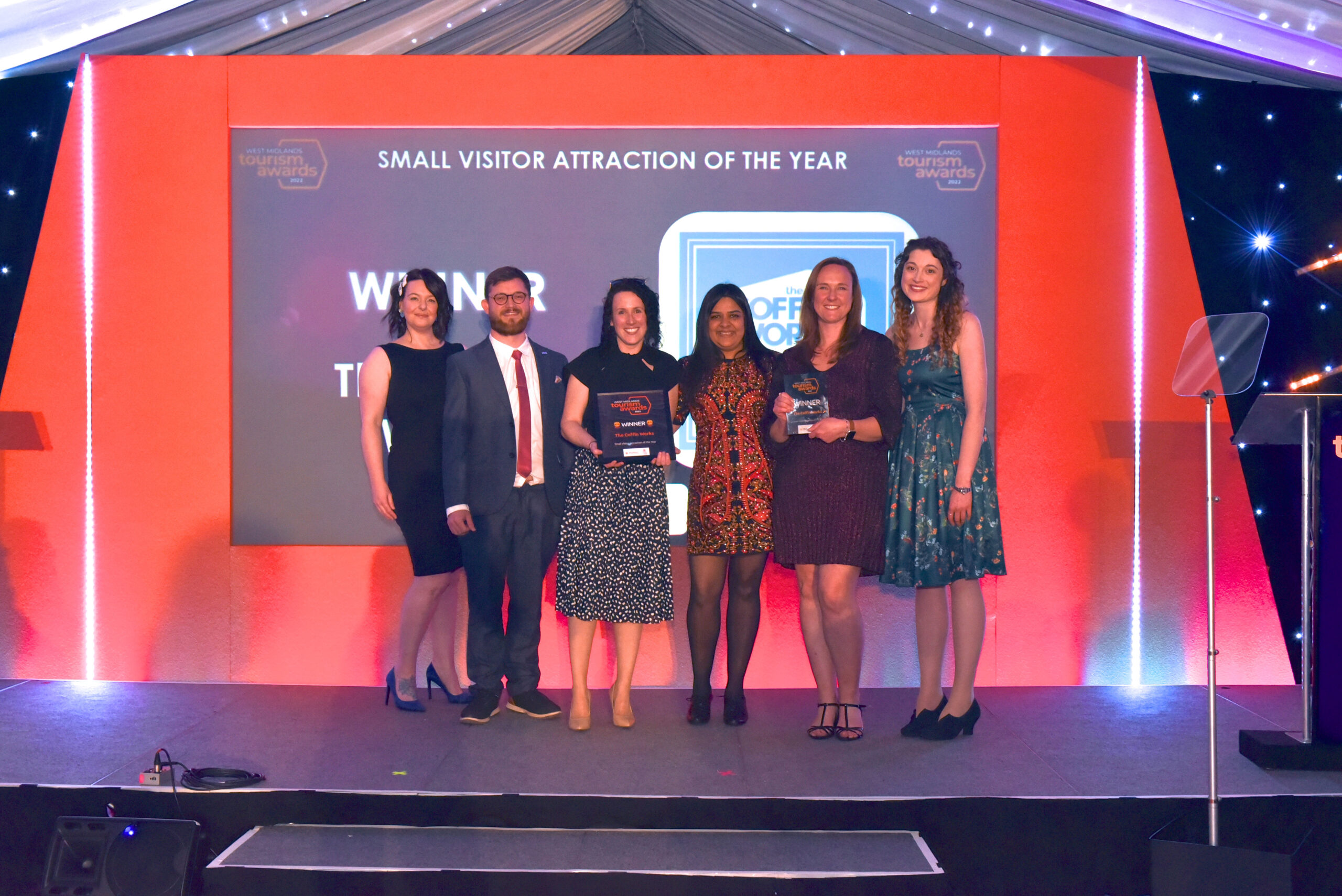 The Coffin Works is an award-winning museum in Birmingham’s Jewellery Quarter, built around the unique contents of the Grade-II* Newman Brothers’ coffin fittings manufactory. It opened in 2014, and its unique collection fills a gap in material culture, as the only surviving example of a its kind.

This small attraction has a staff team of three and over 75 volunteers who are vital to opening its doors and welcoming visitors. Since opening, the museum and its team have won 11 significant awards, which most recently includes the Queen’s Award for Voluntary Service, the highest award given to charitable organisations.

The West Midlands Tourism Awards celebrate the success and resilience of tourism businesses across the region and promote the strength of the business and leisure tourism offer, its venues, people, experiences and accommodation.

The awards also serve to highlight the importance of tourism’s contribution to the regional economy, which stood at £13.1bn in 2019. Together with our industry partners, we will seek to grow the economic value of tourism during the next decade, using major events including UK City of Culture 2021 in Coventry and the 2022 Birmingham Commonwealth Games as a way to bounce back post C-19.

Eligible winners from the West Midlands Tourism Awards will automatically feed into the Visit England Awards for Excellence 2022 for the chance to be recognised as a national winner.

The Jewellery Quarter Business Improvement District (JQBID) was established in 2012 and is overseen by the JQDT Board of Directors. The JQBID was introduced by the JQDT as part of its long-term plan to improve the business environment of the Quarter, making it an attractive location for people to visit and businesses to invest. 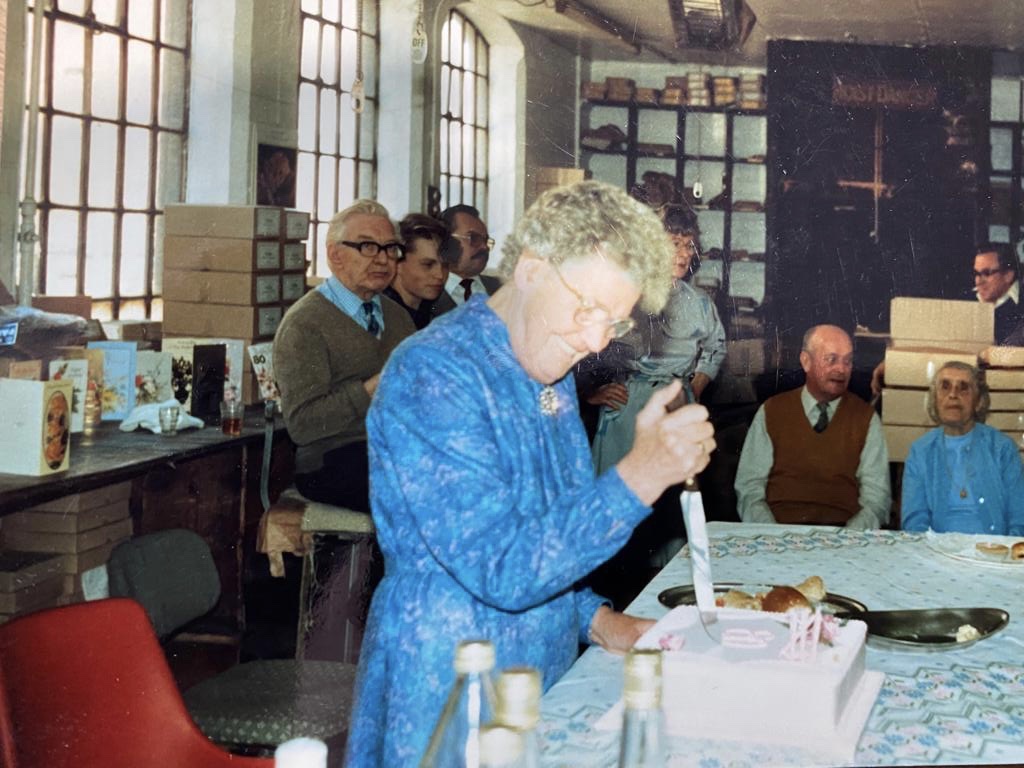