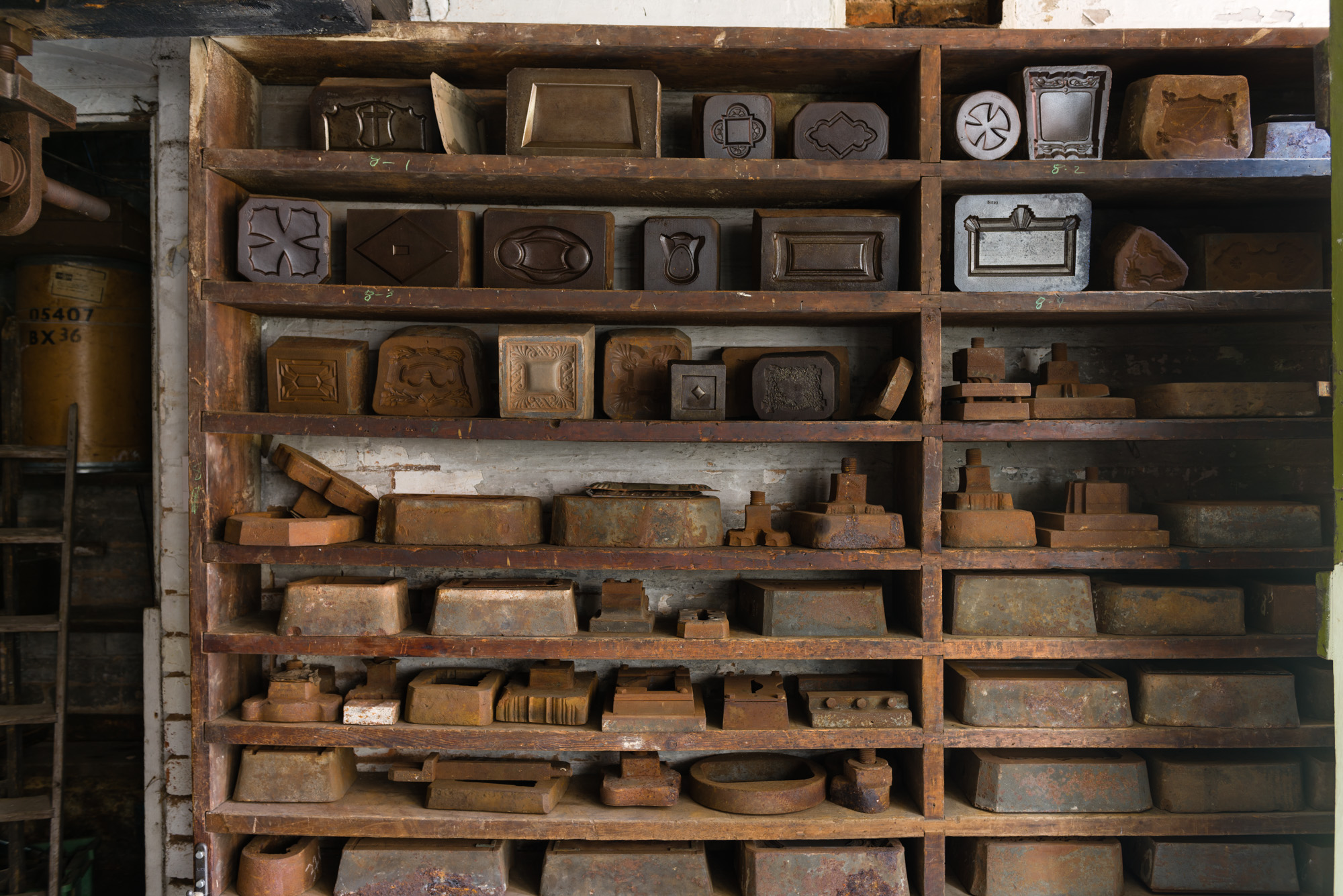 On the ground floor, next door to the former Plating Shop, is the Stamp Shop. This still survives, with much of the original equipment intact and working, and forms one of the highlights of a visit to the museum. Along with casting, stamping was one of the two basic processes by which items of coffin furniture were made in the factory. Stamped products could be mass produced in great numbers, and were much cheaper to make than cast products.

The basic piece of machinery is called a ‘drop stamp’. The process involves stamping a shape into a sheet of metal by dropping a heavy metal weight or hammer. In the Stamp Shop at Newman Brothers, there is a ‘battery’ of four drop stamps, from small to large, together with one very large drop stamp on its own. These are used to make coffin fittings in a range of sizes. The smallest drop stamp is suitable for making ornaments the size of a coin, while the biggest drop stamp was used to produce the breastplates that go on the lid of a coffin, engraved with the name of the deceased.

As well as the drop stamp itself, the other key piece of equipment is the ‘die’. This is a block of steel engraved with the shape of the object to be stamped out. These can be intricate in design and it takes great skill to produce them; the craftsmen who made the dies were called ‘die sinkers’. The die sinker at Newman Brothers for many years was Mr Ray, the same man who carved out wooden patterns for the castings. Anthony Allen, the son of Arthur Allen, Newman Brothers’ travelling salesman between 1903 and 1939, recalls him in words and images as;

“…a delightful old character, Mr Ray, he had very small steel-rimmed spectacles and he made all the patterns. He had a block of tool steel,    incredibly hard. He’d draw a design on it and it would probably take him two months to chisel it out, like a wood carving almost. And if you look at the Stamp Shop here, you’ll find some of them. They are beautiful bits of work and it was an incredible job. He not only made the big ones, he made all these little ones as well. He once made a pattern for me in wood to make a steam engine.”

However, the die is only half of the job. To stamp out the pattern in a sheet of metal, a corresponding ‘positive’, or raised, shape is needed to fit into the ‘negative’ shape carved into the die. This positive shape is called the ‘force’, and is made out of lead. To make a force, the die is fixed under the hammer and molten lead is poured into the carved pattern in the die. A temporary wall of clay around the edge of the die keeps the molten lead from spilling out. The hammer is then gently lowered onto the lead. After about ten minutes, the lead force sets and sticks to the bottom of the hammer. Everything is now ready to stamp out a coffin fitting. 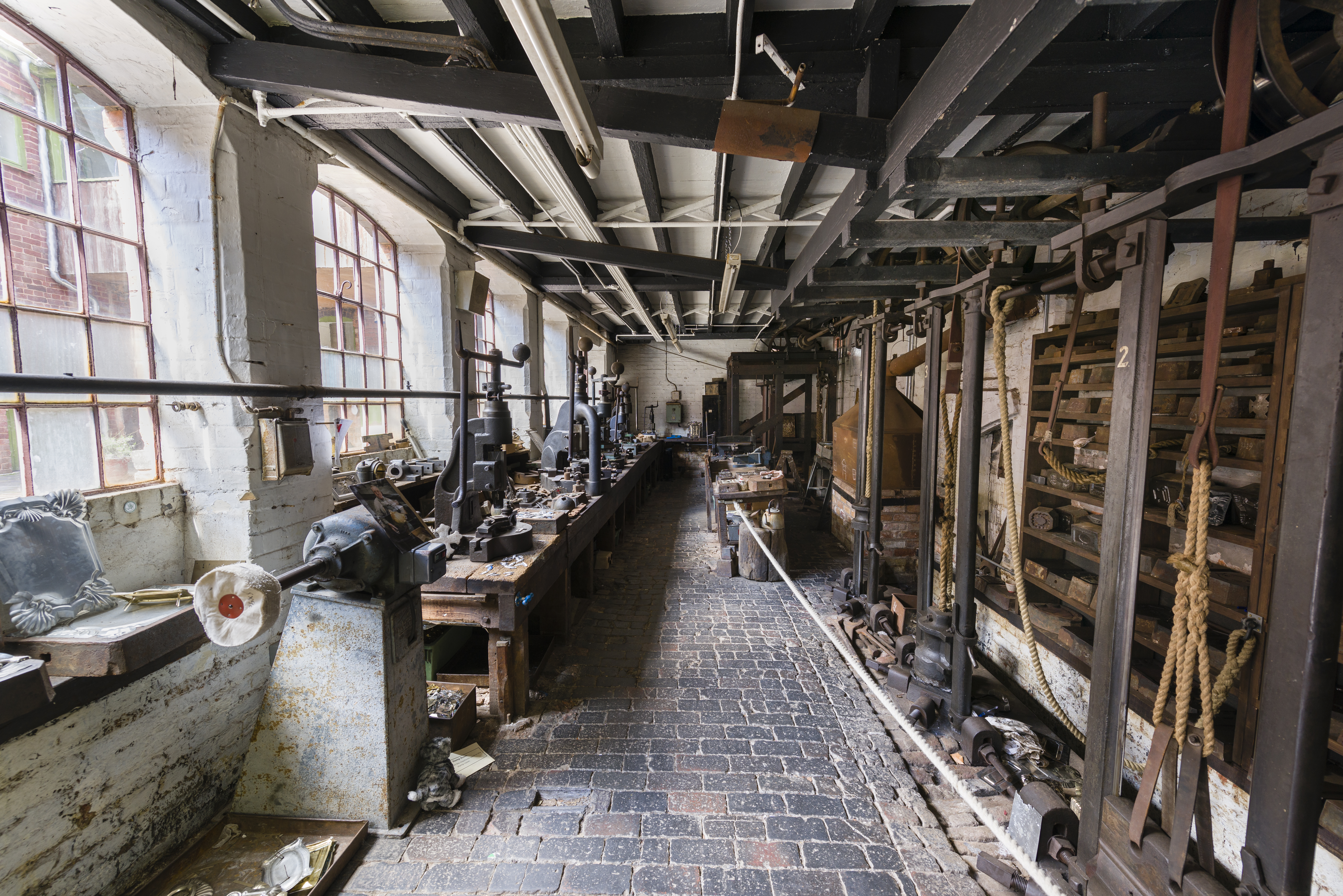 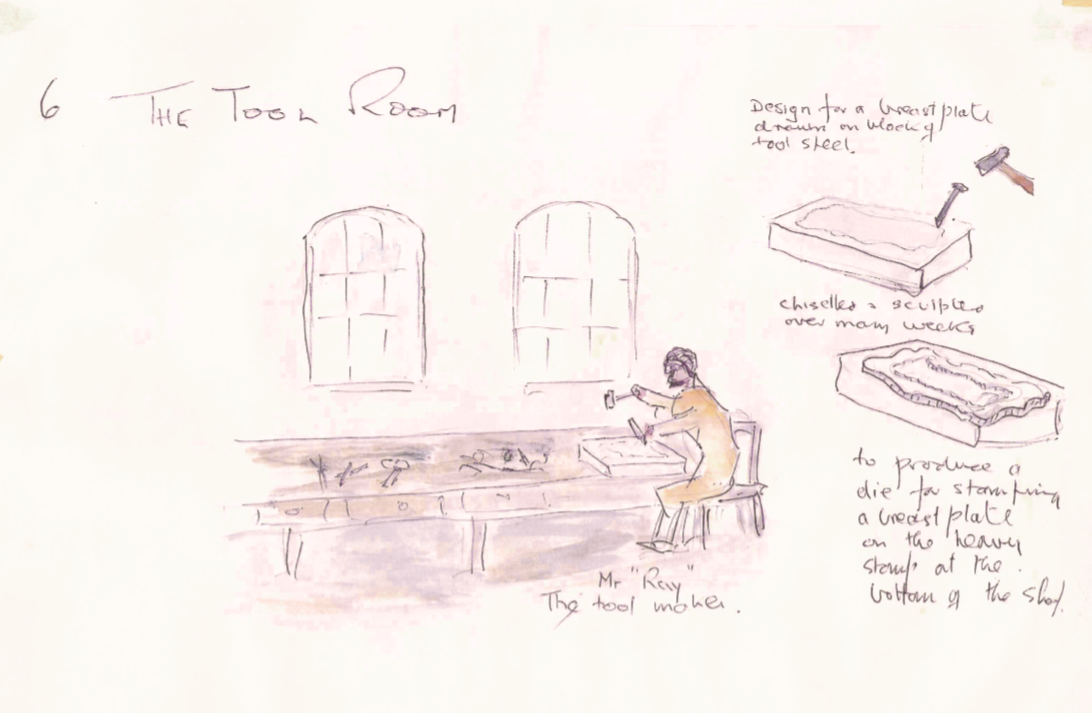