These sewing tins were found in the Shroud Room or the Sewing Room, as it was also more commonly known by the women who worked there. These women were referred to as seamstresses, and each of the sewing machine ‘stations’, where the women worked, had its own sewing tins, packed with cottons, needles and thimbles. The Shroud Room was the most important workshop on the second floor. This occupied the whole of the front range, and its height maximised the available light.

You can discover what was inside the tins below! 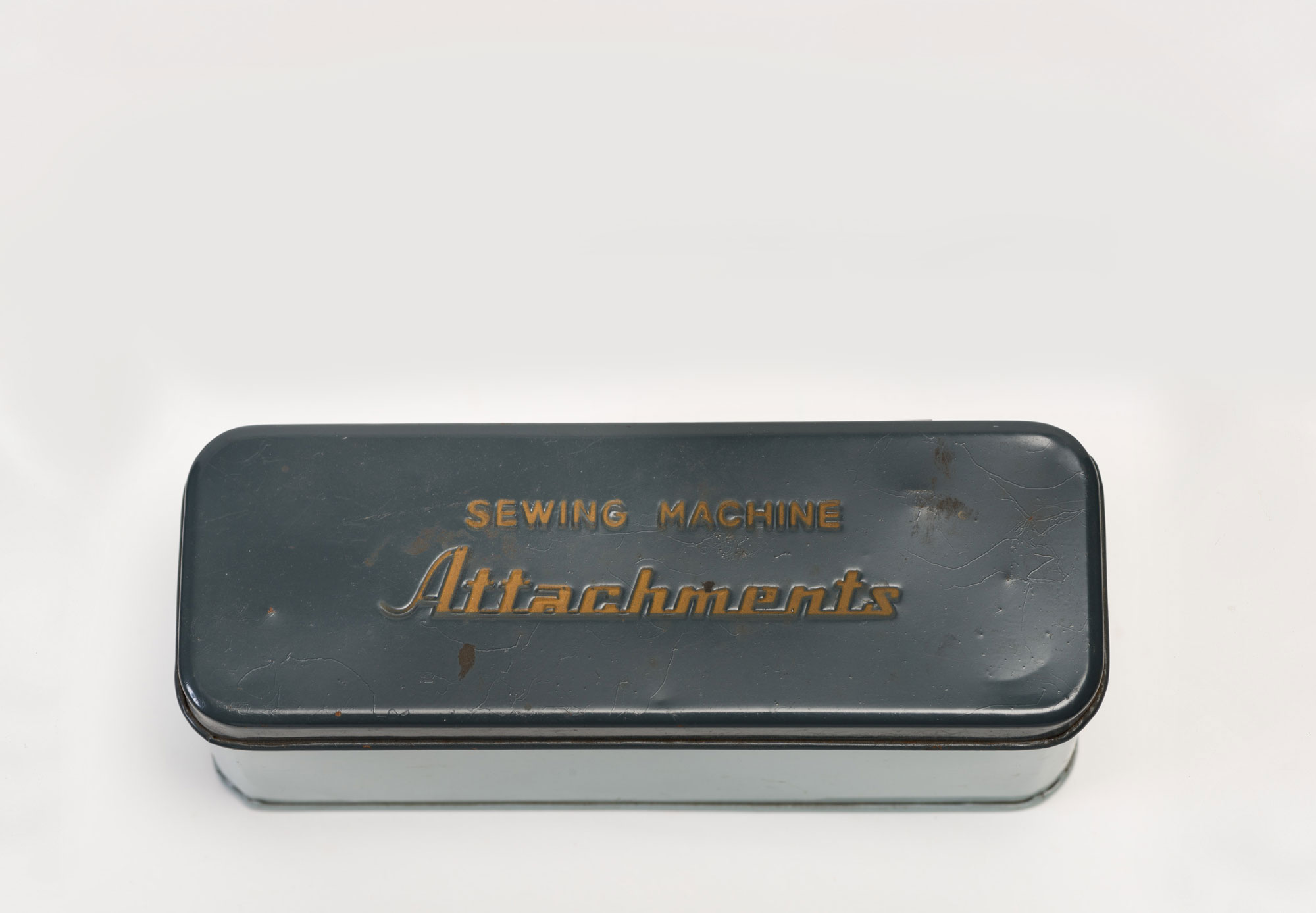 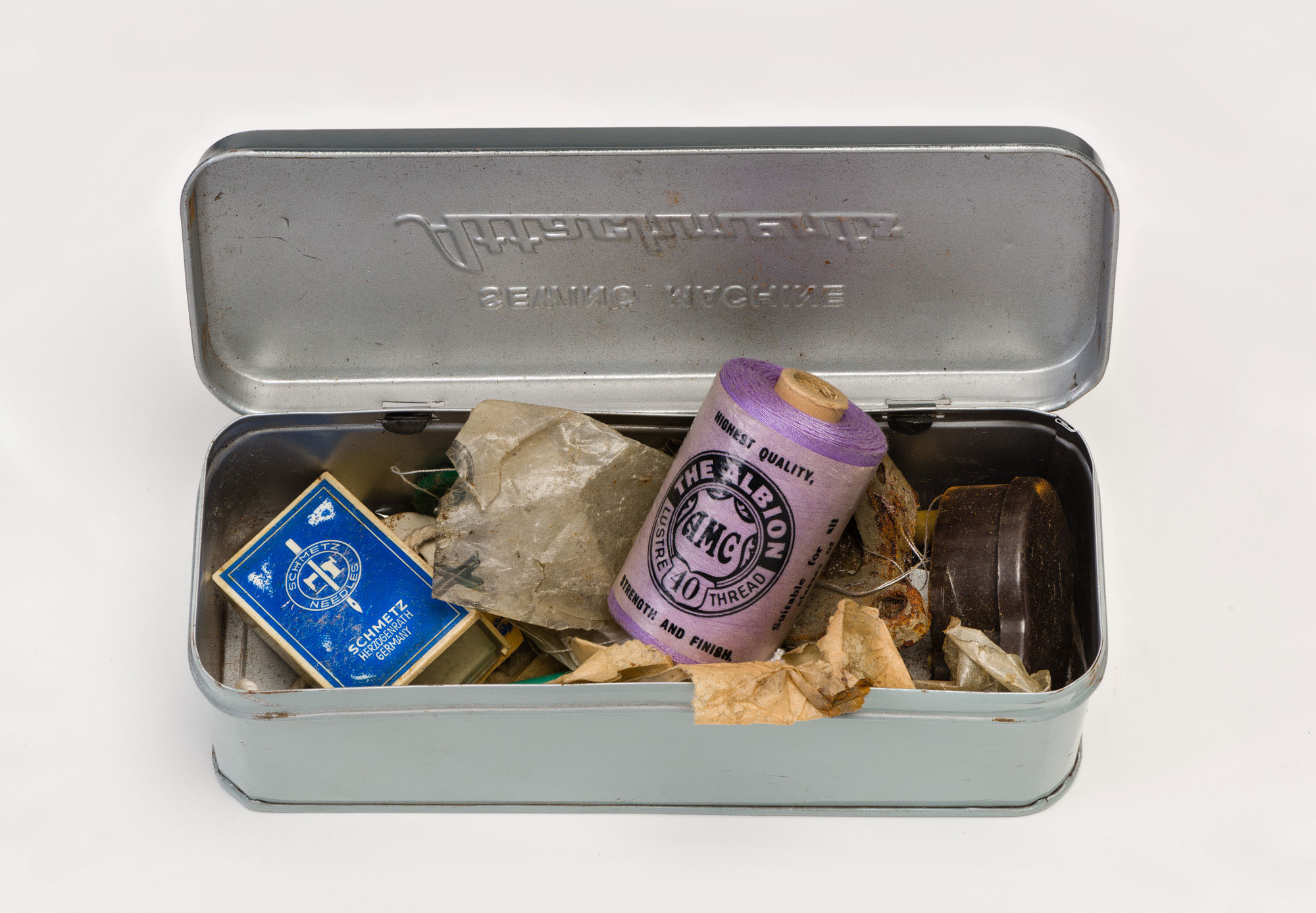 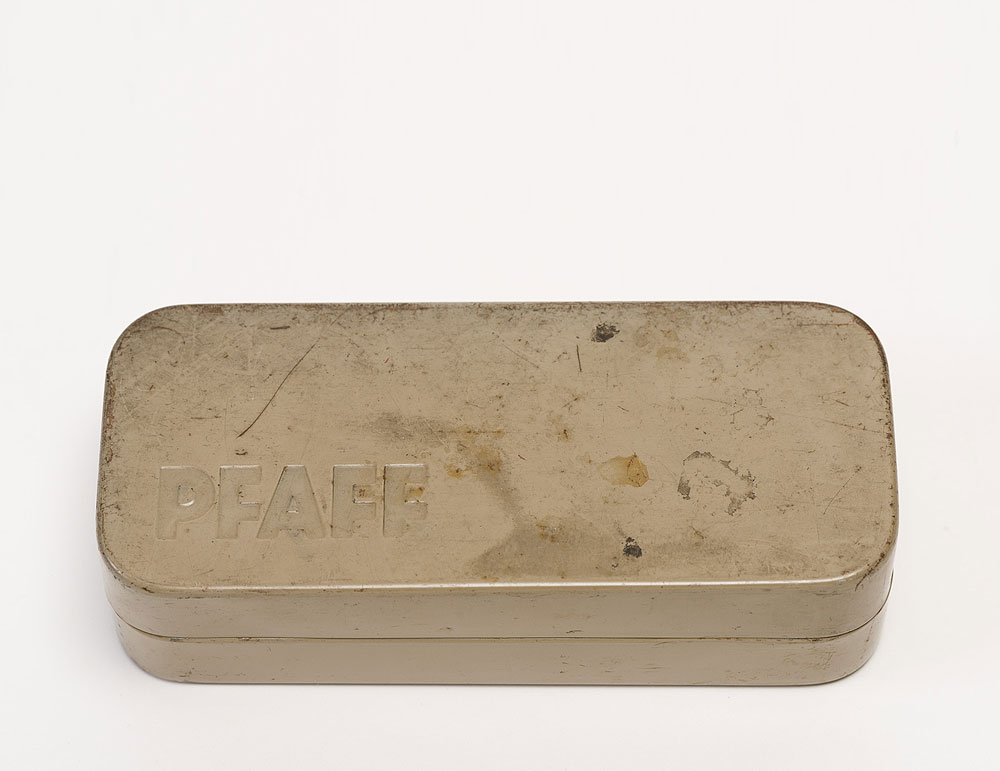 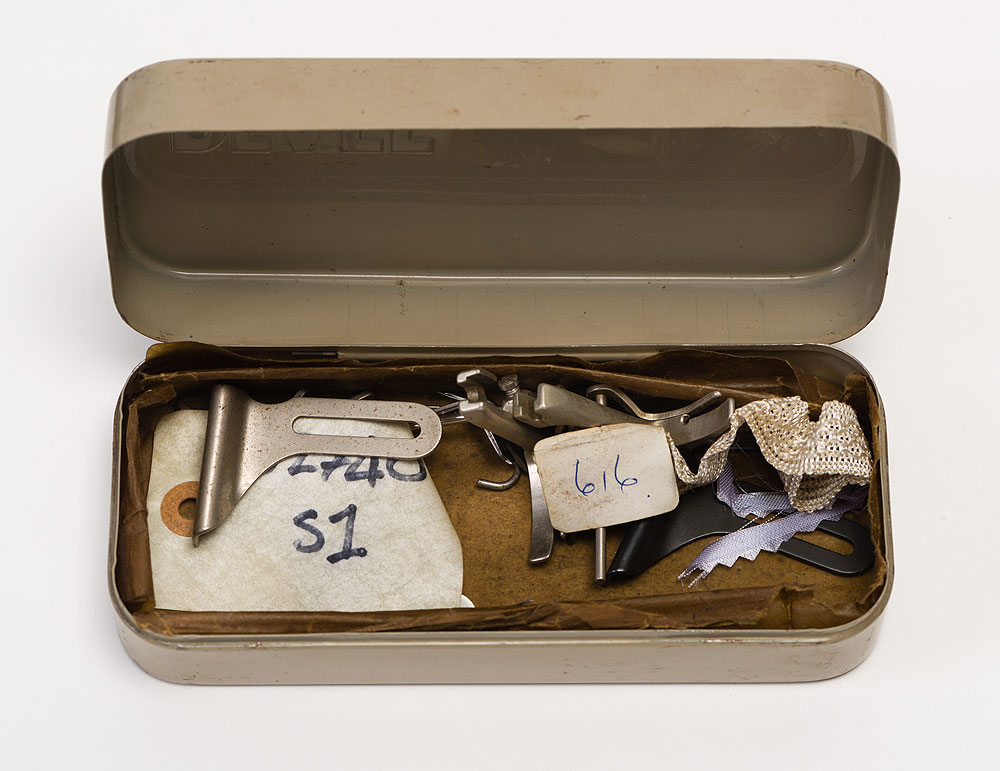 Occupying the whole of the top floor of the front range of the factory, is the Shroud Room (or Sewing Room). This was almost exclusively the domain of women; at least 15 ladies worked in the room. Here were made the funerary robes in which the deceased would be dressed, and the pillows and linings for the coffin. On the shelves are the roles of material, originally silks, cottons, satins, Swansdown and lace, but by the later years all largely synthetic.

Occupying the centre of the room are tables which were used for cutting material. At one end of the room, next to the hoist is a ‘crimping machine’. This old piece of machinery, which probably dates from the early decades of the 20th century cut out the scalloped-shaped edging in the material.

Under the front windows, along the length of the room, runs a long bench with nine sewing machines – Singers, Pfaffs and a Wilcox & Gibbs – and an ‘overlocker’, a sewing machine designed to join seams and stitch over the edges of cut fabric so that it doesn’t fray. The windows above the bench provided the seamstresses with good natural light, but the bottom panes are made of opaque glass, either reeded or frosted, so that the ladies wouldn’t be distracted (indeed many of the windows in the factory were designed in the same way). Elizabeth Weaving, who used to work in the Shroud Room remembered how cold it used to get:

“In winter it was very cold in here, because of the old Victorian windows. In the summer, it was the reverse, because you’ve got all this glass, and it’s really hot. And I know sometimes it could be that cold that you could actually see frost gathering on the inside of the panes, and you’d sit with your jacket on, or run across to the fire, especially when we had our breaks. And stand like the Victorian gentleman!”

By all accounts, the atmosphere in the Shroud Room was rather jolly. The ladies listened to the wireless over speakers fixed to the ceiling and wall; Workers’ Playtime and similar programmes. They joked about the work, describing themselves as “making clothes you would be seen dead in”. At the heart of the room is the all-important tea station still with the crockery, gas fire and toasting fork in place. 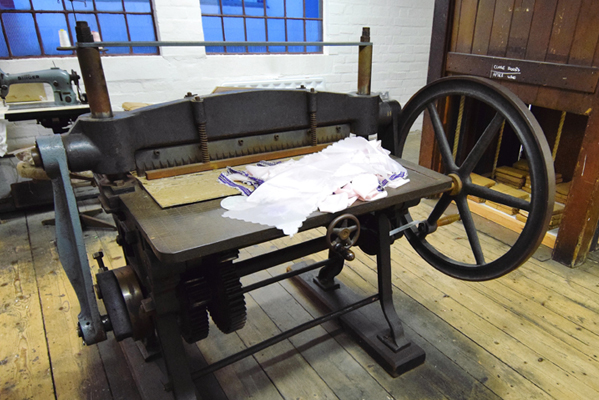 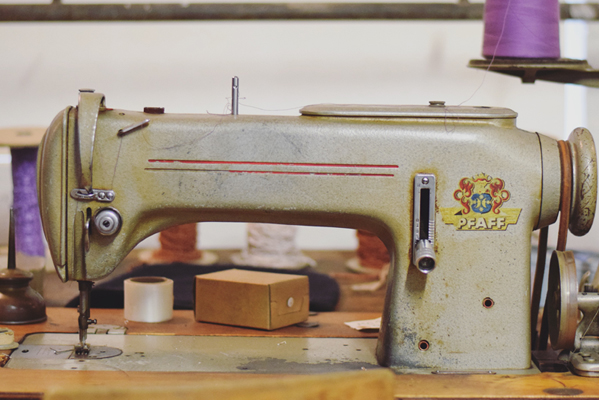 Elizabeth Weaving began working in the Shroud Room, or the Sewing Room as the ladies preferred to call it, in the early 1970s. She had previously worked at T. Ellis Jones, another coffin furniture manufacturer based in Birmingham. It was while working there that Elizabeth helped to make the shrouds for the 116 child victims of the Aberfan disaster of 1966, when the collapse of a colliery spoil tip destroyed the school of this Welsh village. Her involvement in this event was something she carried with her throughout the rest of her life. However at Newman Brothers, the ladies in the Shroud Room largely had a happier time. Elizabeth remembers being caught by the management modelling the shrouds. When people used to ask her what she did for a living, she recalls,

Married in a shroud

Sheila Maher began working in the Shroud Room at Newman Brothers in the late 1950s. In March 1960, three months pregnant, Sheila needed to get married quickly, but unable to afford to afford a wedding dress, came up with a plan to pinch shroud material to make one instead:

“I decided to come to work very early in the morning, because we could get in anyway, and I used to measure up the lace and the silk. And what I used to do is fold it up and put it round my belly, because being pregnant they didn’t know any different, but I used to be frightened to death in case it fell down when I stood up! When I first got married, things didn’t always go well, and we used to be fighting and arguing. One day I said to my husband, ‘no wonder I’ve had no luck, because when I married you, I got married in a shroud!” 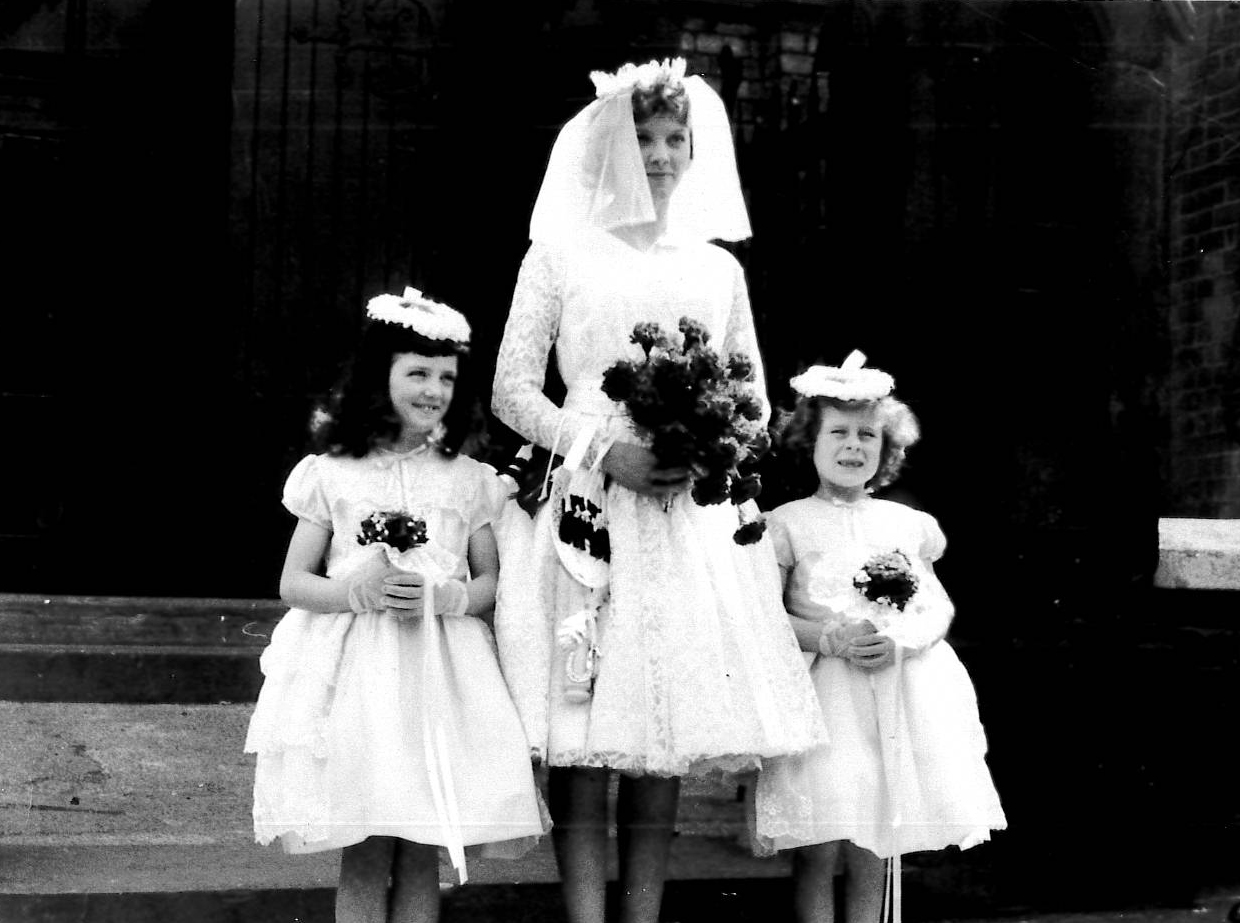