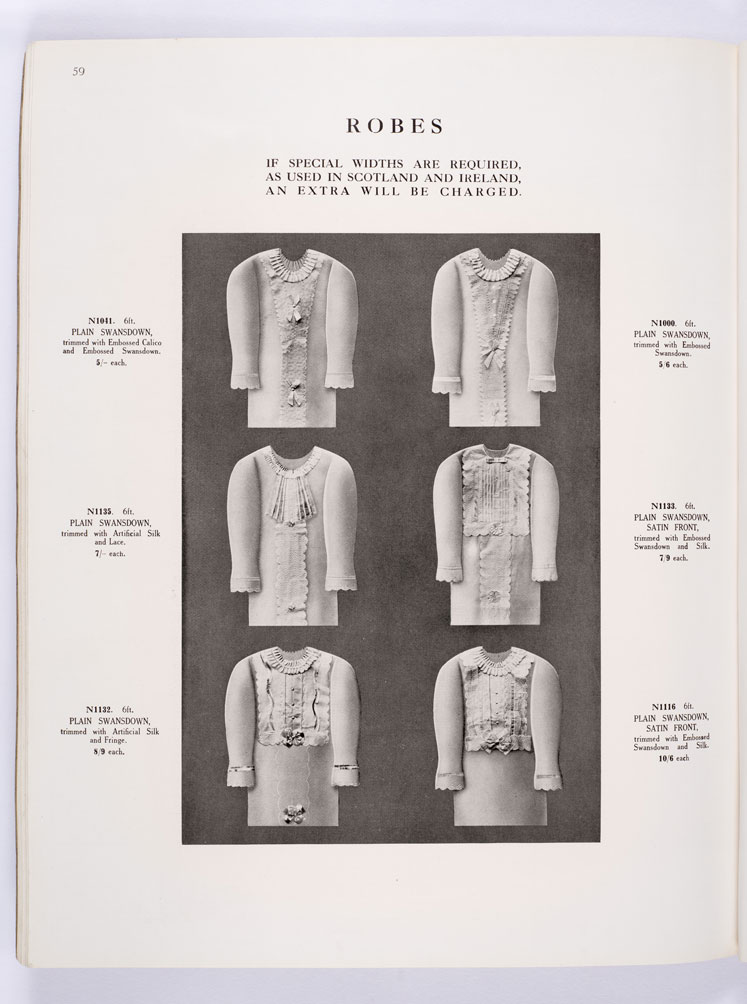 This page is from a Newman Brothers’ trade catalogue, dating from around the 1920s. The range of shrouds on offer was much more limited than that of the metal coffin furniture.

Ensuring that the deceased was well dressed in the coffin was paramount. This was because it was customary for the body to stay at home for up to three days after death, thereby giving family and friends a chance to see their loved one. It was also a premium advertising opportunity, where the funeral furnisher or undertaker could advertise his merchandise. They were judged on how well dressed and suitable the attire was. After all, material was matched to social status. Brushed cotton was chosen for the working classes, and silk and linen being used for more middle class robes.

By the start of the 19th-century, the shroud expanded in terms of design with distinct styles for men and women, boys and girls. Men’s shrouds often had a bow resembling a bow tie, and women’s shrouds usually had a high neck frill. We first see the use of Swansdown, a popular material of choice at Newman Brothers, now replacing silk. The development of the shroud seems to have reached its climax in the 19th century, not developing to any great degree beyond the 1920s. Shrouds of the late 19th and early twentieth centuries bore a close resemblance to christening gowns or baby clothes. This was often the case because they appeared mainly in white, which was largely the case until 1970s and 1980s, where a broader range of colours were on offer. You can see some of these colours by clicking here to see what Newman Brothers were producing at this time.